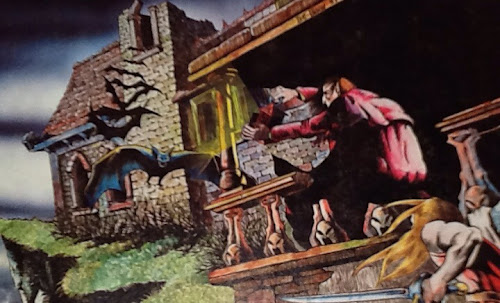 I plan to do one of these module retrospectives every week or so, I also plan to keep these relatively spoiler-free. In order to do this I will simply give some of the highs and lows without a tremendous amount of detail.

The Sinister Secret of Saltmarsh or module U1, is first on the chopping block. This module is suggested for play with characters at levels 1 through 3. Read on to see how it fares.

Originally released in 1981 and written by Dave Brown and Don Turnbull, The Sinister Secret of Saltmarsh, or SSoS from here on, was the first in a series of three modules developed in the United Kingdom. To me the module has always managed to convey a unique sense of "Britishness". There is even an interesting aside in the beginning of the module regarding some of the differences in spelling between the UK and US. They also explain that Americans may find the text a little "flowery".

This module offers a lot to the player in terms of varied approach and just as importantly, is a blast for the DM as well. Often the involvement of the DM is taken for granted but one of the strengths of SSoS is its ability to "work" the DM yet remain clear, concise and engaging at the same time.

The Sinister Secret of Saltmarsh is one of the best modules I have ever been in the DM's seat for. I remember reading it for the first time and thinking that it was unique, I had played quite a bit by that point so maybe it was just leaving the dungeon, so to speak. Upon re-reading it for this post however that uniqueness came flooding back and I feel confident in saying it has withstood the test of time.