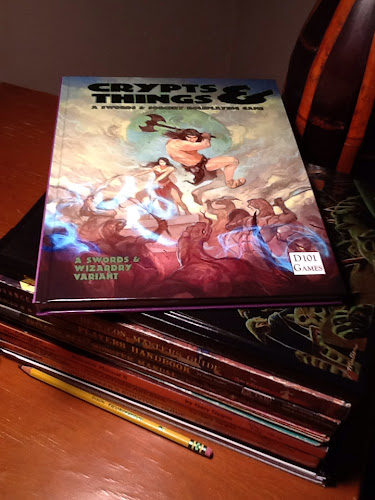 If you are familiar with Swords and Sorcery Core and Akrasia's House Rules (In fact, the title page shows the author as being Newt Newport with Akrasia) then you will recognize the skeleton upon which Crypts and Things is built. In fact the rulebook spends the first 35 pages or so presenting these two systems clearly and concisely to the reader. Additionally in this first "Player's Handbook" section you get some great art and a few minor deviations from the norm.

Some of these deviations are that there are no demi-humans in Crypts and Things and that the Undead can't be turned either as a class abilty or by a spell. Additionally, there are no alignment systems, the reason being that the world itself is an amoral one. Also of interest is the fact that magic Is almost always a bad thing. This implies that there is a price to be paid for magical power, not only for spells either, artifacts and magic items can carry a toll as well.

This is where the game really starts to show it's greatest strength, and the Swords and Sorcery aspect really starts to shine through. What is the game's greatest strength? Undoubtedly the setting and the ambiance. Newt Newton's world-building, milieu and overall vibe really start to assert themselves in the "Crypt Keeper's" section of the book. He includes a map of the continent with different locations that are well realized and each is given a small description.

Two more sections that do an especially good job of getting you into the Sword and Sorcerey mindset are the "Ill Gotten Gains of Dark Desire" (treasure and magic items) and the "Compendium of Fiends" (monster manual). Many of the magic items and monsters are tailored to fit the setting and it provides a nice immersion factor.

In addition to everything I've already mentioned you get a small adventure, a character sheet template and a very strong selection of appendices. These were perhaps the best part of the work other than the setting for me. They include such varied things as, The Role of the Crypt Keeper, Random Objects, City Events, Horror and Heroism, Descriptive Phrases and quite a few others. Most are tables of sorts but some like The Role of the Crypt Keeper are advice sections. All are designed to fit within the setting.
Crypts and Things by Newt Newport is a lot of things. How many of these things you need will determine how much mileage you get out of it. If you are confident in building a Sword and Sorcery world yourself and don't feel the need for inspiration then perhaps Akrasia's House Rules are sufficient for you. However, if you are a big fan of Swords and Sorcery or the fantasy worlds of Howard, Lovecraft and Lieber then Crypts and Things moves into must buy territory. It also bears mentioning that the game can be tailored to fit almost any rules system and is very adaptable, it can be used for anything from a single adventure to the basis for an entire campaign.
Posted by Dienekes at 2/27/2012 12:01:00 AM