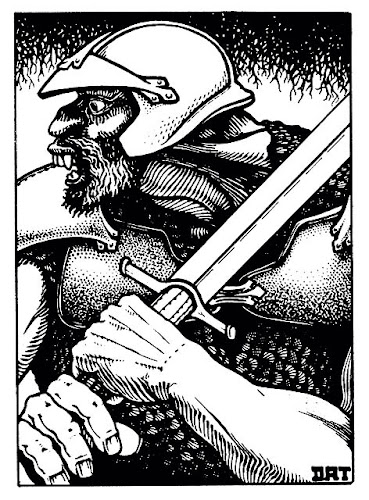 Ok, so it's Friday. Apologies for not getting this up yesterday, I realize I am a day late but here is another beauty from Tramp (and hey, you can't complain too much, I did give you two for one last Thursday!).

This week is my favorite from Trampier's series of giants which he drew for the Monster Manual. I never much cared for the most of the Trampier giants honestly. The Hill giant always reminded me of a big, dumb, doofus and not something tremendously scary (as it should be I guess). The Stone giant always looked too much like Lurch. The Cloud giant, well, let's just say he was a little effeminate for me. But the Fire giant, ah, the Fire giant, majestic!