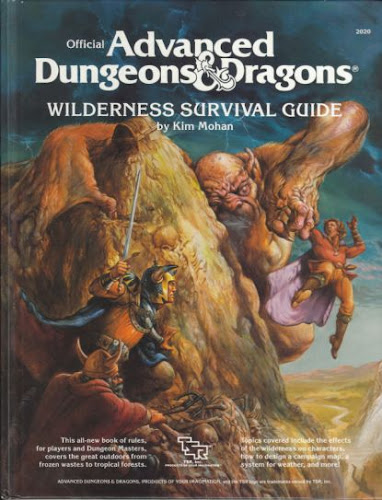 The WSG by Kim Mohan or The Wilderness Survival Guide if you're not into the whole brevity thing, can be a fairly divisive book among First Edition faithful. In fact, some will say it is not even a First Edition book, labeling it as a 1.5 offering. I personally don't differentiate a 1.5 edition of ADnD, but that is a topic for another day. What makes this book a point of contention?
In order to answer that question, we must take a look at the evolution of the game up until the WSG's publication in 1986. What started out as an open, free flowing, organic, system in the White Box was growing into an ever more rules orientated beast. Moving from Chaos to Law if you will permit the analogy. Naturally, this trend rankled some and unfortunately some of Gygax's own words in his introductions and throughout his works exacerbated the situation. Gygax was most likely "towing the company line" when he seemed to say at various points, in various ways, that these are the rules and it is strongly suggested you follow them. Clearly it was not something he subscribed to in his own games and differed greatly from his early stance of the DM using his best judgement and common sense for rules resolution.

By this point you may be asking, "Okay, but what does this have to do with the WSG?" Well, to answer that question, quite a bit. I feel that a lot of the animosity toward the book is not so much directed at it's content as it is at the misconception that it must be used. I believe many felt required to use it's contents due to some of Gygax's earlier statements covered above.

The fact is that many of us are now used to mixing and matching bits and pieces of systems that we like and discarding those that don't work for our groups or play styles. The OSR has made this a perfectly acceptable practice but back in the day there was a perception that you were either following the rules or you weren't. I would posit that higher adherence to the published books was the norm at the time. Therein lies the problem. No one could be rightly expected to follow and use every rule in this book. Doing so would be an exercise in tedium. However, I would argue that as a sourcebook and supplement the volume is excellent.

There are a lot of wonderful ideas, charts and systems in place for those who choose to delve into them. In fact for a book with a $15 dollar price point at the time (likely even cheaper now in most cases) this was/is an absolutely spectacular value for the amount of data and content it provides. $15 dollars at the time was basically equivilant to two modules by the way. Quite honestly if you are running outdoor adventures or a sandbox style campaign this book really is a no brainer.

If you have ever had qualms about picking the WSG up set them aside and try it out. Even if you can find nothing of value in the text of the book, which I believe is virtually impossible, the art alone is worth the $10 to $15 dollar investment. As a bonus most of these books tend to be in excellent condition due to the large amount produced at the time.